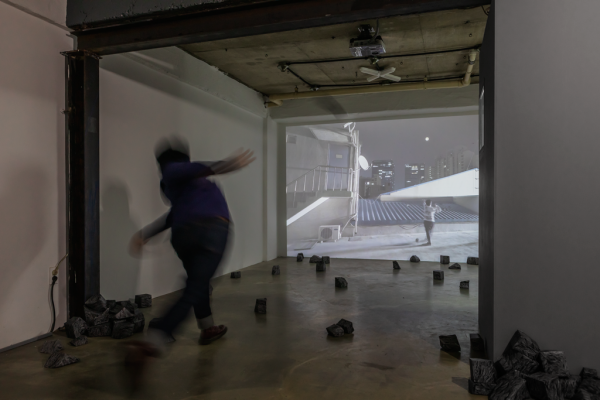 Waiting For A Face

There are many ways to fight art. It is classic to declare meanings or to argue how the value and logic secretly forced by the noble art are absurd (and many artists, curators, critics, have chosen to do so). However, as those thriller dramas called crisis of system (or crisis of value) have always ended accusing the same old criminal (art), as time went on (or say, the episodes went on), the tension of the thriller has lowered, and now we find it more and more challenging to focus. Therefore, today’s anti-art, unlike those of the past, has stepped down from the leading role of the blockbuster, crisis of system, and it wanders around all varieties of tastes and genres presented by the contemporary pluralism.

If someone asks, nevertheless, why we still need to fight art, then I would assume that the questioner has only ever just kindled relationships (or had too solemn relationships) with art, or has already been frustrated (surrendered) by the authority and the wiliness of impregnable art. However, art is not a temple that we have to bow before. Rather, it is a living artifact that awaits a fight once in due time. So, it is okay to say when the time is ripe, ‘I, the anti-art, is back.’

Art has been accused, but art is ever more thriving (and, moreover, it takes the reason of its accusation as the alibi). So, perhaps, anti-artists are not too different from artists with views of pro-art. (They even take pride in their anti-artness badges.) However, anti-art cannot be flagged as a property by the pro-artists. Instead, it is something that derives from all variety of drives to move and shake the art that became to look obvious (in other words, art that is stock-still). Or, perhaps, it is a subconscious escape to run from the boring depth of the static art. The drive furtively emerges from somewhere in our minds. Suddenly - profane the art (for no reason)! Furthermore - profane the anti-art, too (as it is still an art)! And lastly, profane the ping-pong game of the continued You (art) and You (anti-art) (entertain us who are bored! Then that shall be enough!)!

Likewise, Yoonsuk Choi’s drive is not found on the level of big discourses, such as system and art, to begin with. Instead, his drive is an instinctive resistance against art’s solemn and heavy atmosphere and resides in the territory of the anti-artistic drives that make fun of both old arts and old anti-arts. So, he uses everyday life on a level far from the heroic Avant-garde, which had attempted to merge the mundane with the seriousness of art for the salvation of art (and for the salvation of the people). On the contrary, Yoonsuk Choi locates his mundaneness (valuelessness) on the level of art’s style and system, and enjoys a state of art’s vacancy induced by the juxtaposition. And there, the seemingly empty works of Choi gradually neutralize the heaviness of the enlightening value system around art.

Constantly bringing back the mundane into art’s system to force on them the typical depth of art is, in a way, alike freezing the mundane to fill art’s vitrine. The ordinary remains lively with its natural energy when the deepness of the system and the heaviness of ideas have not thoroughly permeated yet. In other words, the ordinary is like the many crevices among sturdy structures of great values, and it is like those narrow trails that everyone knows yet are not marked on the map. Also, for that reason, it is a small and precious shade (privacy) where one can hide from the sun of discipline (efficiency) and reason. (And for that, perhaps, the mundane is not only beautiful, but it is also mysterious). So the ordinary, which is not yet stuffed into taxidermy, has to be shallow and flexible, so it can constantly run from the depth of art and its structure (like oil and water). The artist is well aware of that.

The artist cheekily puts the mundane over art, even when the two seem impossible to coexist1. Leading the audience towards a precarious border where it seems either art or the mundane needs to be negated, he takes the typicality of the ordinary, appropriated by his antecessors who pursued heaviness, as a fake motion. Here, the vain plots of his works, somehow familiar but slipping away from expectations, function as a device for escape (a sort of parody) that enables him to stand the ‘daily weight’ of the ‘everyday life’ in art’s excessive seriousness. So, it is as if his works are determined to disappoint all the audiences who expect predictable artistic results (either good or bad). However, the continuous slipping of narratives in his works hollows the space where the serious and weighty art has been occupying and slowly turns it into a huge void.

The artist’s face in his works has represented his daily life, and the face, which is expressed in a way that highlights his ordinariness far beyond the average, has been the most symbolic in his practice. Since the artist himself is the leading performer of his performance and the real-life model of his daily life, it is expected that his face stands for the artist’s serious performativity and enlightenment that suit such a structure. However, his way-too-ordinary face (and its expression) disrupts art’s sense of reality, as if Donggun Jang and Won bin are starring as shoeshiners during the Korean War in a movie. And here, his face starts to function as a subtle and masochistic mirror of art. As Duchamp made Mona Lisa (or art) a male prostitute, Yoonsuk Choi makes his face (with its utterly unarty expression) art, baffling both Mona Lisa and Duchamp. Someone might take it as a serious challenge to art, but in fact, it is not too different from the urge that drives a class clown to mock the serious school principal during his boring morning speech. It is because we always strive to look outside the window from the suffocating inside. For this reason, the solemnity of art and seriousness of nonart all become sources of futile laughter in front of his face.

The artist, facing a mannerism with the fact that he will still be working with the same old face after ten years of working with the face, still waits for another face in this exhibition. His attempt to renew his face that he grew tired of reminds of any new art that has always been anticipated by art with anti-artistic drives. As mentioned before, his face (his mundane life) is a mirror of his art. Therefore, the artist awaiting a new face represents ourselves waiting for new art. So here, we ask the mirror. Mirror mirror on the wall, who’s the fairest of them all? And the wise mirror answered as such:

“Well, I tried to do something with my face, but I failed, so I am trying to tell a story about erasing the face.” (From Yoonsuk Choi’s note)

​1  For example, in his early work ‘a song for maternity (2014)’, an ordinary event (eating a mom-made meal) as it is, in between a maternal care and a style of art, perplexes everyone who are expecting artful results delivered by the usual arts.